Jameíto: a unique inhabitant of Lanzarote

For those of you who already know something about Lanzarote, you are probably think that the Jameíto is related with the famous Jameos del Agua. You are right!

This species of crustacean is endemic of the island of Lanzarote. It is known also as blind crab of the jameos or with its scientific name: Munidopsis polymorpha.

Even if there are other crustacean belonging to the same family, in other areas of Canary Islands, this specific ones lives by the Jameos del Agua.

Other specimen have also been found, in smaller quantities, in other areas such as Los Charcos de Luis, in Órzola, where sea water is filtered to create a suitable habitat.

The Jameíto is very important for Lanzarote and many people consider it as the animal symbol of island.

This blind crab is very small and it rarely exceeds the 3 cm longitude. It has a curious white colour that remember us that it’s an albino animal.

One of his qualities is that he has a great sense of hearing, but we cannot say the same about its sight. That is why it is also known as the blind Jameos crab.

On both sides of the head it has two spines and a little flattened tweezers. These are bigger in males than in females.

Depending on the amount of food in the surroundings it can limit its movements to the area around him or it can move freely to find food.

Which is the difference with the other crabs?

It is small and albino and also its habitat is completely different.

However, the Jameito inhabits the andean system of the Jameos del Agua, which was formed with a large eruption of the Corona  about 21,000 years ago.

The  Volcanic tube of Corona is formed by a series of undeground caves that are connected with the ocean. In fact, seawater seeps into them to give rise to a rich ecosystem with a unique fauna full of fascinating crustaceans.

These have been able to adapt to their unique surroundings. It’s the case of  the  Jameíto, that even if it is blind could survive also to the beginning of  tourism.

Since when it has been discovered, many expert zoologists tried to protect this peculiar animal.

With the opening of the tourism by the Jameos del Agua, the blind crab drastically decreased its population. The human hand changed their habitat and recently visitors have been banned from throwing coins into the lagoon, as they were polluting and killing their fauna.

Luckily nowadays there are different ways to check the life conditions of the Jameíto and other inhabitants of the Jameos. Protect its surroundings it’s a priority for the canarian institutions.

Come to discover the Jameíto with Canarian Transfer

Do you love animals? Are you passionates of different species? As  Canarian Transfer we recommend our excursion to the Jameos del Agua.

Discover one of the emblematic place of the  island that you cannot miss. If you need transfer from the airport to your accomodation, you can count on us. Discover Lanzarote! 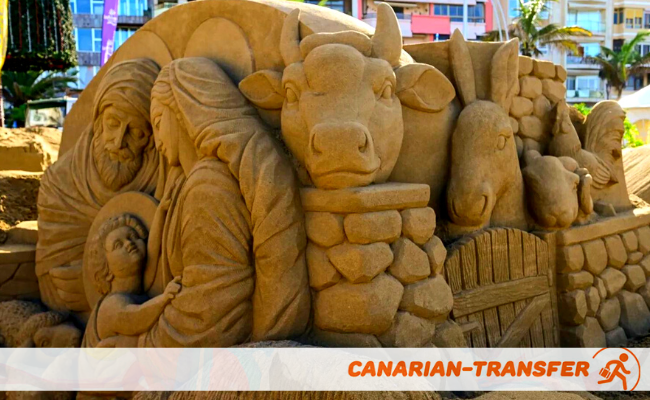 We anticipate the most instagrammable corners of Gran Canaria!

Legends of Lanzarote. The best excursion in Lanzarote: you can't miss it!